This is the fourth in a series of articles about the Common Core Standards for Mathematical Practice. Today’s discussion is on the third Math Practice Standard: Construct viable arguments and critique the arguments of others. 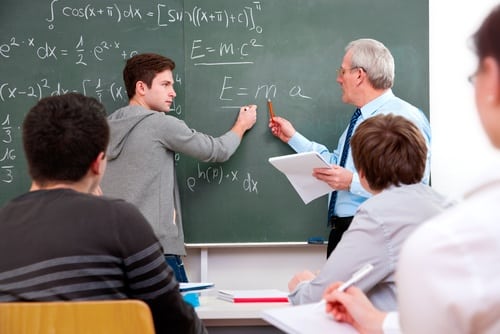 Mathematics in the real world often involves a cycle of inductive and deductive reasoning. We notice a pattern; then, we use logic to prove (if possible) that the pattern generalizes to all cases. The third Math Practice Standard focuses on the deductive part of the cycle. It concerns putting together a series of statements (verbal, symbolic, or visual) that build on each other in a logical order, starting from known facts. In this manner, an undeniable proof of the conclusion’s truth is made.

Understanding what statements follow from another, being able to generalize from a specific example, and avoiding circular reasoning are difficult mental feats that take time and consistent study to develop. “Proof” in math class is often consigned to Geometry, sometimes manifesting as a series of formulaic, desultory two-column triangle congruence proofs, quickly discarded. However, proof, if thoughtfully approached, can be woven throughout the year. The strategies below apply primarily to Geometry class, but proofs can and should be continued in classes with algebraic content.

(1) Proofstorming. This is my [GM1] name for the process of building students’ ability to look at diagrams and make a series of logical statements about them. At the beginning of the year, simply ask students to list all information that is given in a diagram. Are there any right angles? Congruent line segments? As new concepts and vocabulary are introduced, students’ lists will grow.

As the year goes on, students can start making inferences about diagrams. “If these two angles are congruent, then these two lines must be parallel.” We’re not directing the students toward any particular goal; we’re just asking them to develop lines of reasoning. The more the better! Still further in the year, ask them what they would need to know in order to prove a particular item. “If we knew these two angles or these two sides were congruent, then the triangles would be congruent.”

Keep a publicly displayed “Proof Toolbox” list of all theorems that have been proven so far. Tell students that they can use any theorem on that list in a proof. They can brainstorm how the toolbox theorems do or do not apply to a given situation.

(2) Error analysis, counterexamples, and proof as a tool. Students often see proof as busywork. “Everything we do in math class is true; why do we have to prove it?” So, give them some statements that initially “feel” true (for example: every number is smaller than its square) and ask them to try to poke holes and find counterexamples. Questions in the style of “Two of these problems have errors but two do not” are particularly helpful, as they require to students to decide whether there is an error and, if so, to identify it.

For visual examples, ask students to draw exaggerated versions of diagrams to find and test the extreme case (to see if a rectangle’s diagonals are perpendicular, draw an extremely long and skinny rectangle; the falsity of the statement grows more evident as the picture grows more extreme).

A quadrilaterals unit is a great spot to show students the value of proof as a tool. Students can make conjectures about kites, for example, and then look for ways to prove those conjectures using congruent triangles. Give them the agency to determine the truth or non-truth of a statement.

(3) Different types and modalities of proofs. Cut a two-column proof into pieces (statements and justifications), and have students put them in the correct order. Create poster-sized flowchart proof blocks; students can arrange and post large-scale proofs on the walls. Discuss how a paragraph proof, a flowchart proof, and a two-column proof are all equivalent. Look at “proof” outside of math: How is proof in math different from proof in science or a courtroom?

(4) Generalizing. Students often have difficulty understanding the difference between proving something for a specific instance and proving it for the general case. An idea is to give students both of these diagrams and ask them to show that a, b, and c add to 180°, as do d, e, and f. 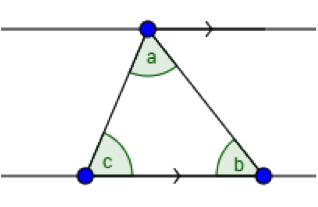 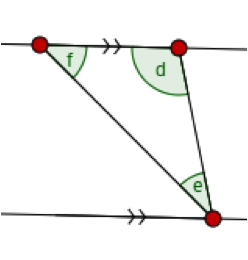 Because the diagrams appear different, students will likely tackle them as completely separate problems. Afterwards, lead a discussion on the similarities between the two proofs. “Is there anything in this diagram that restricts it to this specific picture? What if the parallel lines weren’t there? Would the proof still work?” Consistently differentiate between a specific instance (“This is true only for this diagram”) and a general case (“Now we’ve proven this for all triangles”). “Always-sometimes-never” questions are also quite valuable for continuing the distinction between the specific and the general.

In the end, one of the most powerful tools an educator has is to consistently ask, “How do we know?” Students will take that question with them outside of our classrooms and become skeptical and thoughtful citizens of our information-driven society.