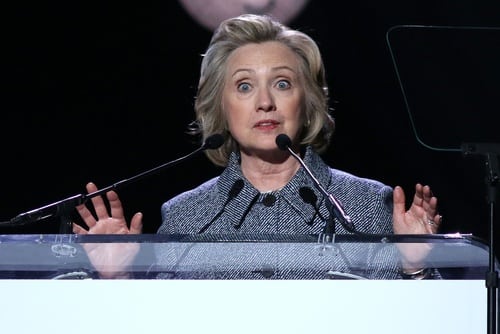 The Washington Post is running an article entitled “Clinton Celebrates Victory, Declaring ‘We’ve Reached a Milestone.’” The article begins: “Hillary Clinton laid claim to the Democratic presidential nomination Tuesday night, making a full pivot to a nasty general-election fight against Donald Trump as she prevailed in a vigorously contested primary in California against Sen. Bernie Sanders.”

It continues: “Clinton, the first woman chosen as the standard-bearer of a major American political party, celebrated the occasion with a forward-looking address to supporters in Brooklyn, not far from her campaign headquarters and just a few miles from New Jersey—where she defeated Sanders in the first of six states voting Tuesday.”

The article adds: “Clinton offered a grace note to (Senator Bernie) Sanders and to his supporters watching her speech. ‘I know it never feels good to put your heart into a cause or a candidate you believe in and come up short. I know that feeling well’ . . . She said Sanders and the ‘vigorous debate we’ve had’ have been ‘very good for the Democratic Party and for America.’”