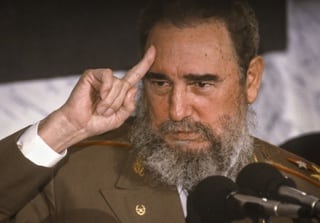 Fox News is running an article entitled, “Former Cuban leader Fidel Castro dies at age 90.” The article begins, “Longtime Cuban leader Fidel Castro, the bearded, cigar-smoking Communist revolutionary who infuriated the United States, inspired both loyalty and loathing from his countrymen and maintained an iron grip on Cuban politics for almost 50 years, died Friday. He was 90.”

The article explains, “The lawyer, revolutionary and political leader who triggered such visceral reactions was born August 13, 1926 out of wedlock to a Cuban sugar plantation owner and a servant in his home. (They eventually married.) He was not formally recognized by his father until he was 17, when his surname was changed to Castro from Ruz, his mother’s name.”  It adds, “After spending time in prison, Castro went into exile in Mexico, where he met Ernesto “Che” Guevara, who became his confidante…Castro established another guerrilla force and after several years of fighting, eventually defeated Batista in 1959, taking control of Cuba at the age of 32.”